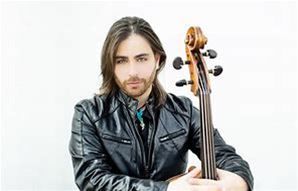 Born in Valencia in 1988 to Italian immigrants and moving to the United States at an early age, Carmine Filippo Miranda (Carmine Miranda) is a Venezuelan/American cellist, international soloist and recording artist. Carmine began his musical studies at the age of seven at the Carabobo State Music Conservatory in Venezuela, where he studied his first years of Theory and Solfege, finally graduating from the Private Institute of Musical Education or I.P.E.M. He studied with cellists Luisa Fuentes, Valmore Nieves and William Molina, at the Latin-American Academy of Violoncello, and the Simon Bolivar Conservatory of Music (the institution that spawned the famous “El Sistema”). At the same time he was a member of the National Youth Orchestra and the Orchestra of Beethoven under the direction of Giuseppe Sinoppoli.

In the U.S. he studied with cellists Ross Harbaugh, Lee Fiser (LaSalle String Quartet) and is a pupil of cellist Yehuda Hanani at the University Of Cincinnati College-Conservatory of Music where he obtained a Bachelors of Arts in music, Master’s Degree and Doctorate’s degree candidacy. He has participated in several music competitions as a soloist and chamber player winning several recognitions and awards at a national and international level. Among them include the Coral Gables Music Club award for best instrumentalist, won the first prize of the 2005 Alhambra Music Competition, National Prize for best soloist from the FMEA (Florida Music Educators Association), the 08-09 University of Cincinnati Cello Competition, a Distinguished Award from the 2012 IBLA international competition, “Gold”, “Silver” and “Bronze” Medals from the 2014 Global Music Awards for Best Of Show (GMA's highest honor), Best Emerging Artist, Best Instrumentalist, a 2015 Hollywood Music in Media Awards nomination and also a laureate of Fischoff, Concert Artist Guild and Hudson Valley Competitions.

At the age of twenty two, Carmine recorded the Six Cello Suites by Johann Sebastian Bach under the label Centaur Records, joining the ranks of the youngest in the world to record the entire work. In 2013 Carmine completed the United States premiere of Nikita Koshkin's "L'istesso Tempo" composition for cello and guitar. He was also selected to represent the University of Cincinnati as a soloist for a multi-state American tour with the CCM Wind Orchestra culminating with an opening night performance at the College Band Directors National Association (CBDNA) National Conference in North Carolina’s Aycock Auditorium. Currently Carmine Miranda is a recording artist for PARMA Recordings, and plays on a 2005 Jules Azzi cello made in New York City. Carmine is a Dogal USA artist and performs on Dogal’s Montagnana strings handmade in Venice, Italy.